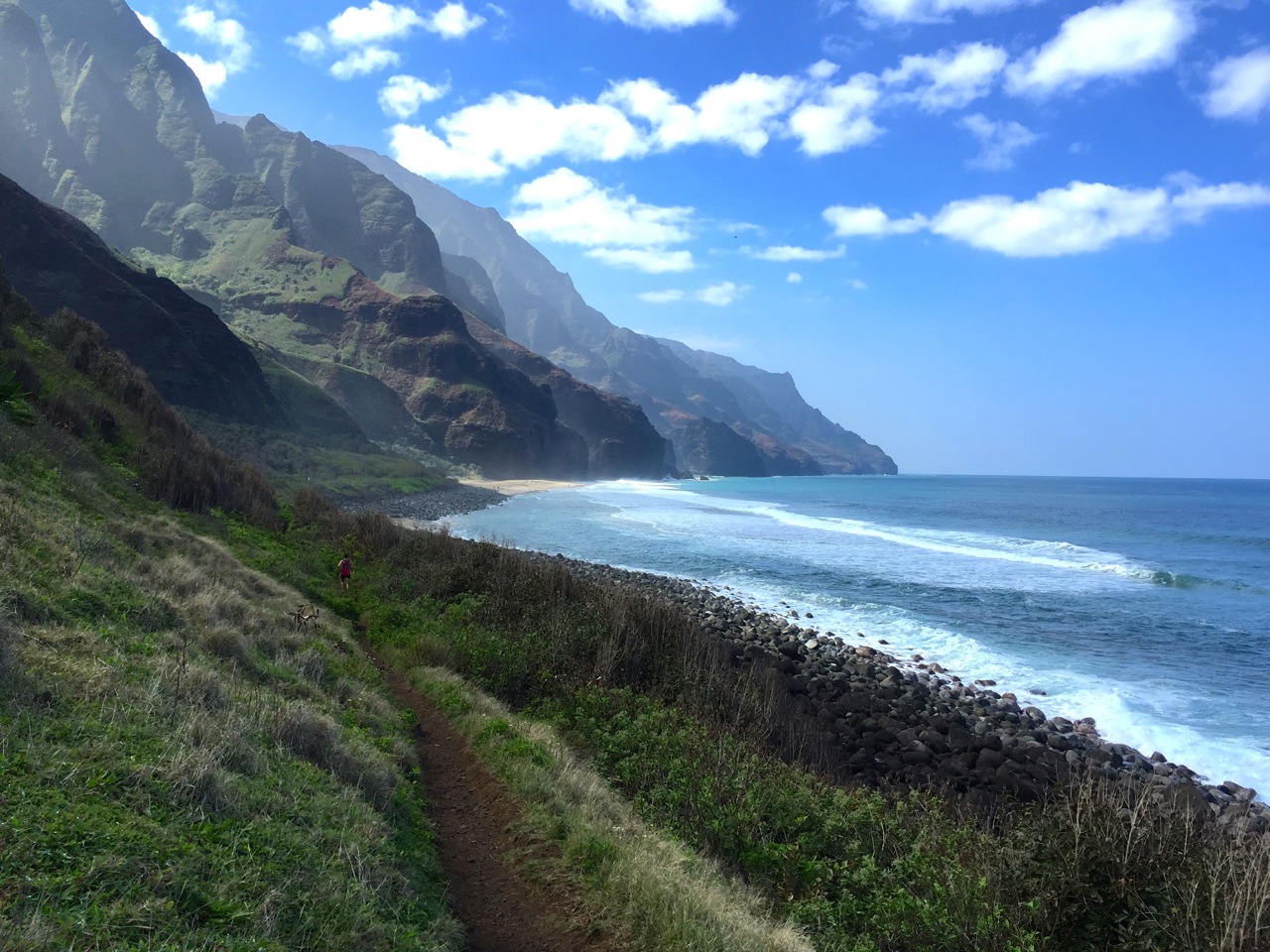 The title of “Most scenic trail in the world” is thrown around a lot. It’s always hard to pick a number one as every epic running route has its merits that can make it worthy of such an accolade. So instead of saying this is THE best, we’re gonna say it’s one of the best.

Stretching for about 16 kilometers from Ke’e Beach to Kalalau beach along the Na Pali Coast, this rugged track is one of the popular hikes you can do on the Island of Kauai….well at least the first 3km or so. It seems the vast majority of people pack some water and snacks and then only tackle the first leg of the journey to Hanakapi’ai. But it’s beyond this point that things get really special.

At the trailhead there’s a toilet block and car park that quickly fills with walkers. An early start will see you in a good spot and in and out of the bathroom ready to hit the track. Within five minutes you’ll get a feel for what the whole trail is like. It’s wet in a lot of places, rocky, strewn with tree roots and constantly rising and falling. It’s technical to say the least! It’s also early on that you’ll need to negotiate the walkers. There are a lot of them, so apart from hopping between boulders you’ll be dodging human traffic. However, it’s a matter of a few kilometres before the people seemingly disappear, with just about everyone stopping at a stream at Hanakapi’ai.

From here the views of the Na Pali Coast and sheer cliffs keep getting better. As the trail twists, turns, rises and falls you find yourself distracted by the incredible scenery, which during the winter months includes migrating whales. But concentration is a must because in many places the narrow track is right on the cliffs edge, so one wrong step and you’re going to be in a bit of trouble.

Along the way you’ll pass campsite (These require a permit) and a few cascading streams. The cool water is refreshing but it’s not recommended to drink it as apparently you can get Leptospirosis from doing so. You also need to be aware that flash flooding is frequent in the area so you can get stuck aon the wrong side of the stream if heavy rain occurs during your journey. It’s advised you check the weather forecast before heading off. The waterways are where we would quickly wash the mud from our shoes (The trail is very muddy in spots) and cool off between running through the hot and exposed sections that dominate the second half of the run.

The trail ends at Kalalau Beach, a picturesque sandy stretch where many a hippy or backpacker pitch a tent in the shade beneath the trees. A black cliff face prevents you from continuing further so after a quick swim or wash beneath the waterfall at the trail terminus, it’s time to head back.

*Pack adequate water and nutrition for the entire run as there are no facilities along the way. There are pit toilets in a couple of locations where camping is permitted.