Recently I had the pleasure of spending a week exploring a small part of Tasmania with the company of fellow North Face athlete Blake Hose. I first went to Tassie as 13 year old for the Australian Cross Country Championships. It was my first running related trip and I remember fondly how beautiful the countryside was and rugged the landscape seemed. Since then it’s been a place that’s particularly close to my heart and I’ve often said I’ll end up living the someday…well at least for the warmer months of the year anyway!

The journey began with a trip aboard The Spirit of Tasmania. The overnight sailing was a fun way to kick things off. Relaxing on deck while watching the sunset over Melbourne during our departure gave me a chance to wind down after a chaotic couple of weeks work. My work/life balance is typically pretty good but on occasion, like most folks, the pendulum swings a little too far towards the work side of things and this Tasmanian adventure was what I needed to correct the matter. The shipboard journey also inspired the name I subsequently gave the whole experience “Spirited Away”. Not only was it inspired by the vessel, but also the animated fantasy film of the same title.

Arriving in Devonport at sunrise first stop was McDonalds. As much as I love my Maccas I didn’t indulge in sausage and egg McMuffin goodness, instead opting for a double shot flat white. The service set the tone for the days ahead – relaxed. From there we made a b-line to Cradle Mountain. It’s a major tourist landmark in the state but if you leave the Dove Lake Circuit and head up the rocky hills you quickly leave the masses behind. Four hours on the Overland Track was a baptism by fire for young Blake, who was not terribly fond of the technical sections and stairs. His recent focus was on flatter running so the usually nimble lad found it a tad frustrating. That said, the epic views and large amount of wildlife sightings made it a run to remember. We spent a few more days running and hiking the many varied trails on offer in the area. There’s a great mix of landscapes to enjoy, from dense rainforest with rock scrambling and muddy paths, to boardwalks through alpine grassland dotted with wombats. It’s a trail runners dream, free of the normal noise and clutter I’m faced with training on the streets of Sydney.

Leaving Cradle we headed west on a 2-hour drive to Corinna. It’s a hidden gem, perched on the banks of the Pieman River in the rugged wilderness of the Tarkine Rainforest. It’s the sort of place you read about in the travel section of the newspaper and turn to your partner and say “How good does this joint look!” and yet you probably never end up going there. In this case I had heard about it from a Tassie local that now resides in Sydney and I was sold on it the minute she said “It’s in the rainforest on the west coast with little more than a handful of cabins for accommodation and a tavern to spend your evenings in.” A quick look online and I discovered that apart from being a great place for trail runners it’s also a trout fisherman’s paradise. So upon arrival the first thing we did was order dinner and duck outside for a quick fish. In a matter of minutes Blake managed a baby brown! 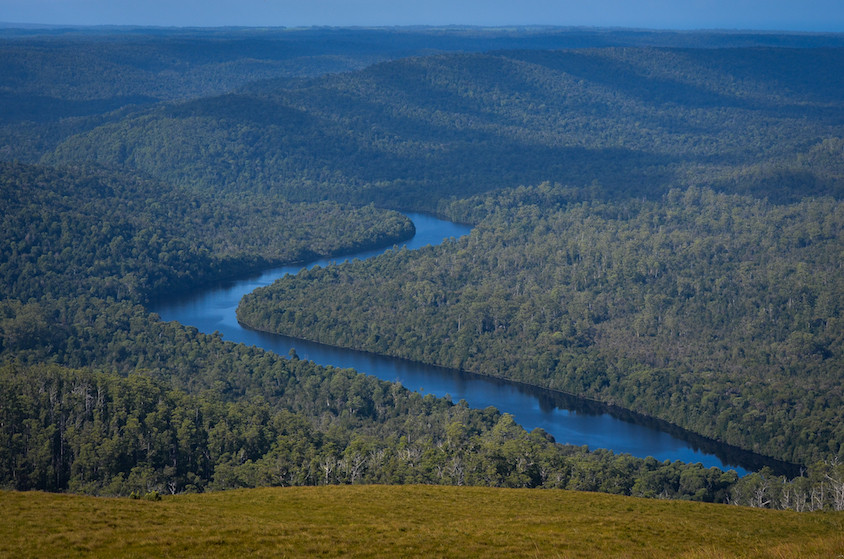 The running in Corinna is either on the beautiful white gravel road that gets you to town or on the few surrounding trails. The road meanders and undulates through the rainforest for about 24km back to Savage River. It’s extremely quiet and very scenic, with the white gravel contrasting with the dark green of the thick forest that flanks it. It’s perfect for tempo running, hill sessions or general jogs. There’s also a great loop trail in the centre of town that follows the river before heading up to the summit of Mt Donaldson. This one is for the trail enthusiasts as it can be quite technical and muddy in sections. The view from the top is worth the effort and running back down the exposed mountainside is a great way to hone the descending skills. When not running, the main pastimes are relaxing by the fire, fishing, kayaking and talking with locals at the tavern.

However a highlight was the river cruise aboard the Arcadia II. It’s a half-day journey that takes you up the Pieman River to the wild west coast. Along the way you learn about the area while taking in the stunning scenery, before disembarking on the beach and spending an hour or more checking out the windswept seashore while munching on lunch. It’s an awesome way to see a place that’s relatively untouched and get an understanding of the regions history.

In all, I would have to say that Tasmania is on par with the best trail running destinations you’ll find anywhere in the world. I’m happy to admit I’m a tad biased, but what it might lack in big mountains like those in the French Alps, or in the unique cultures you find in other parts of the world, it makes up for in raw beauty, remoteness and rich biodiversity. The worrying thing is that these attributes might not be there in a generation to come, so head to Tassie now before the miners and forestry folks ruin it!

For more info on Corinna head to: www.corinna.com.au