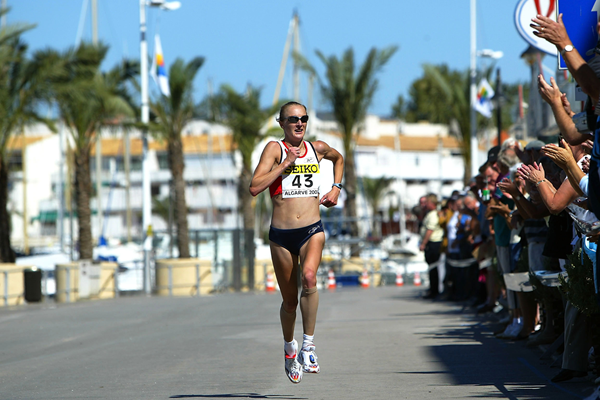 With exactly one year to go to the IAAF/Cardiff University World Half Marathon Championships, three-time world half marathon champion Paula Radcliffe explained what makes the global 13.1-mile contest so special.

Radcliffe is one of just three women to have won a trio of gold medals at the event, having triumphed in 2000, 2001 and 2003. Her first victory represented her first senior global title, having previously come close on several occasions on the track and cross country.

“The World Half Marathon Championships are really special to me,” said the marathon world record-holder. “My first title was in 2000 in Veracruz in Mexico and it came off the back of my disappointment in finishing fourth at the Sydney Olympic Games after having led for 24 of the 25 laps in the 10,000m.

“It kind of was the transition and the boost that I needed at that point to show me the way towards the marathon, which really was my event later on. But at that stage, the half marathon was my event. And it was such a fun event and just something that I really loved, but it gave me my first world title and I think that probably then gave me the confidence to go on and get the world title over the cross country as a senior in Ostend in 2001 and to back it up with more world half-marathon titles.”

Each of her three victories at the championships were special for various reasons, but the 2001 edition sticks out for Radcliffe as it was held on home soil in Bristol, just 125 miles from her home town of Bedford.

“If I think back to my second world half-marathon title in Bristol in 2001, the fact that it was in my home country made it that much more special,” said Radcliffe. “I think it will be special in both ways for the British runners because they’ll want to perform well on home ground but they’ll also have a lot more support, which will be a home advantage for them.”

When Radcliffe won in 2001, her time was just three seconds shy of the world record at the time. The 2005 world marathon champion believes the current world records – 58:23 for men and 1:05:07 for women – could come under threat in Cardiff next year.

“I think it’s possible that a world record could be set,” said the 41-year-old. “It’s a flat course and it’s a beautiful city so it’s motivating scenery and surroundings to run around. I’m sure that the city will really get behind the event and there’ll be lots of support out on the streets.

“The weather at that time of year in March in the UK is ideal for running, especially for trying to run fast times over the half-marathon distance.”

But aside from the course and the weather, what makes the championships truly unique is that it’s the only major sporting event where thousands of members of the public can line up alongside the world’s elite.

“It’s a really special idea,” Radcliffe said of the mass entry of 25,000 recreational runners who will compete in the Welsh capital. “It unites the mass runners with the elite runners. Road running is probably the only sport where you can do that; where you can stand on the start line with 25,000 other runners and all know that you’re going to go through the same motions, you’re going to run the same course.

“Everybody is going to have good times in the race and tough times here and you can share the whole experience. So it’s a really good concept to spread the fun and the enjoyment of running as well as the atmosphere.

“And if a world record is set, then all those people are going to be able to say, ‘we ran in the race that day’ and that really means something.”

Jon Mulkeen and Cardiff 2016 for the IAAF